Fifth in a series.

Our boy had another medical checkup in late November, just after his four-month birthday. It was all good; he weighed in at 13.9 pounds and was 25.75 inches long (or tall?) – a bit low in the percentile for the weight, but nothing to be alarmed at. The biggest thing, as we reported at the time, was that he had to have another round of shots for his vaccinations. Once again, Mommy and Daddy proved more anxious about this than our boy:

But he was fine. Brave, stoic, didn’t even cry out once. He was, in fact, mostly annoyed that Mommy’s hugs were cramping his style – getting in the way of his flirting with the nurses. He was a little fussy and a little feverish and just a bit off for the next couple of days, but this morning he’s back to his old self – gurgling and chirping and playing and kicking and waking up at 5:30. He also rolled all the way onto his side for the first time ever this morning!

Also around this time, we tried to figure out his penchant for pulling off his socks, and I theorized at the time that it was just a side effect of his love of kicking his feet. Nope: I can report now, nearly eight months later, that he just loves taking them off, by any means necessary. Back then, he had to use the friction of the floor; today, he just reaches down and pulls them off. (And usually puts them right in his mouth.)

Nyan Thomas’s fifth month of life took up most of December, and featured another major first: his first airplane ride! Mommy and Nyan spent about three weeks with her family in the UK, with Daddy scheduled to come over at Christmas for a little over a week. That meant he got to meet Pho Pho, Phwa Phwa, his cousins, and the aunties and uncles he hadn’t yet had the chance to charm. 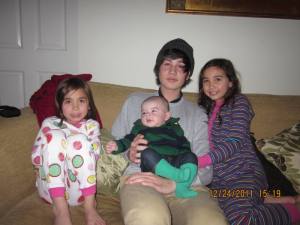 We didn’t know how he’d do on the flight, and were naturally worried that he’d be fussy, wouldn’t do well with the change in air pressure, etc. But no. As we said at the time:

Mommy reports that he was a perfect gentleman the entire flight, even during the two-and-a-half hour departure delay! He spent the entire time either sleeping or – natch – flirting with the flight attendants. That’s our boy!

The next three weeks consisted of Mommy catching up on sleep, and catching up with friends and relatives, and of Nyan getting spoiled, as reported:

Young Nyan Thomas has been winning the hearts and minds of the United Kingdom for the past two weeks. He and his mommy have been getting deservedly spoiled with family love, home-cooked meals, and lots of sleep.

It was, admittedly, not that much fun of a month for Daddy, who was working back in a chilly, dark New York – but there were plenty of Skype calls, and Daddy was happy that Mommy was getting a break from New York, and that Nyan was being well taken care of, not to mention getting to know the K. side of the family.

And at the end of the month, Daddy boarded a jet himself and took the red-eye from New York to London, arriving on Christmas morning. Daddy slept a good chunk of Christmas Day itself – jet lag, you know – but did manage to join Mommy and Nyan for a visit to Mommy’s friend Sharon’s house for Christmas night activities, as we chronicled at the time.

That was also the start of Daddy’s 10-day stay in the UK, which featured lots of fun activities with Mommy and their boy. Coverage of that will have to wait until tomorrow, and the recap of Nyan Thomas’s six month of life…