On Friday evening, we headed to an art gallery featuring some great photographs of Karen freedom fighters, in the mountains of southeast Burma. We met some great people, including some fellow Burmese, and Nyan Thomas made friends with, well, just about everyone, including Luke, who is about 8 years old and was totally enamored with the little man. His mom told us later that as she was putting down to bed that night, “he expressed the desire to have a little brother like [Nyan]. He was really taken by his sweetness. Good job, mama and papa!” Aww, thanks! We try our best.

Some pictures from the event: 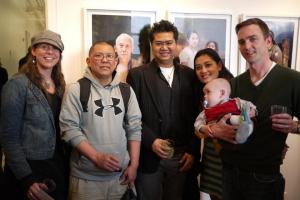 Yes, young Nyan Thomas is a full nine months old today. Make your own comments about how quickly the time passes, how they grow up so fast, etc., and while you’re doing that, enjoy this sampling of photos from our recent trip tot he Midwest, along with a couple of videos: 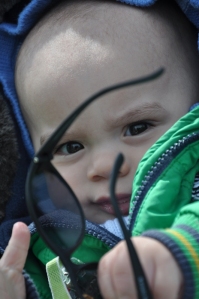 Nyan Thomas with his beautiful mommy:

The little man with Uncle Scott:

Our boy playing “build and then destroy the wood block tower” with Grandma L.:

We’re back in New York after a week-long tour of the fine airports of the upper Midwest (okay, actually just two airports – Cedar Rapids and Detroit – but we spent far more time at each than we expected/wanted) and, especially, the Hawkeye State. Plenty of photos and video coming in the coming days, plus more details on the many, many firsts that young Nyan Thomas experienced over the past week-plus. But first, this video, of Daddy playing with Nyan on the floor of Uncle Scott’s house.

(It’s hard to say which character is making more silly nonsensical sounds in this one, Nyan or Daddy. Smart money is on Daddy; but then, when is he *not* talking nonsense, really?)

And here he is practicing his guitar chops:

Remember these photos, of Nyan Thomas taking a bath in a cozy black bucket? Here is some live video footage of the event:

And here, more recently, is the young man getting a sink-bath:

We’ve said it since almost the day he was born: the kid loves the water. Just baths so far, but we’re looking forward to his first time in a swimming pool…

We’re not quite sure what the little man is up to at the start of this video, but seems to be some sort of land-swimming. Or perhaps he’s working on his Pilates positions? Whatever, it’s pretty darn adorable, says we.

Later on, he starts in on what is his latest favorite thing: grabbing at anything and everything he can, usually with the aim of putting it in his mouth. Remember those days when he would just lay there on his back, looking adorable? Now he goes all over the place, getting into all sorts of mischief, but still looking adorable.

Merry-go-round (with video and pics)

To celebrate Nyan Thomas’s return to New York, I took the day off on Monday and we all headed down to DUMBO, the cool cobblestoned neighborhood down along the river, underneath the Brooklyn and Manhattan bridges. Last fall they opened up a merry-go-round – a restored carousel first built in the 1930s, and one of the few (if not the only) carousels listed on the National Register of Historical Things. Some photos, and a video, of our afternoon (click on photos to enlarge): 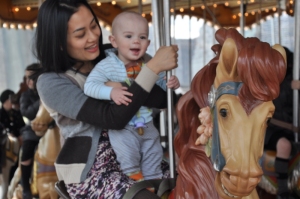 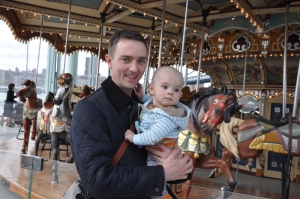 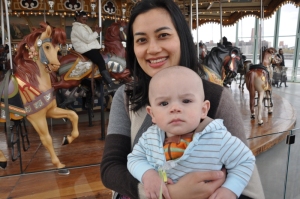 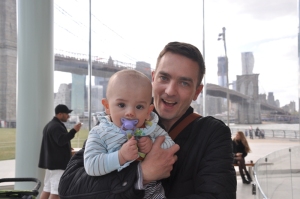 Sunday evening marked the triumphant return home of Nyan Thomas and his Mommy. Daddy was at JFK waiting for them, and was it a happy reunion? It was. Both looked happy and healthy, if a bit worn-down from the transatlantic flight. Daddy snapped a quick shot on his BlackBerry with the little man. Daddy looks happy; Nyan looks exhausted: 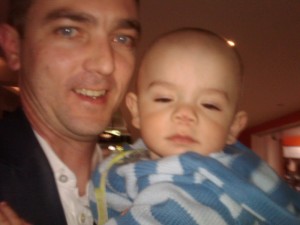 Sure enough, it didn’t take long once we strapped him into the car seat to fall fast asleep and stay that way the whole way home. (Shame too; rather than taking Atlantic Avenue – a pothole-filled road that, though the most direct route and a major thoroughfare, passes through some of the ugliest and poorest parts of Brooklyn; not the way I wanted to welcome my family home! – we took the Belt Parkway, a freeway that skirts the shoreline. Couldn’t see much at night, but passing under the Verrazano Bridge, and seeing New York Harbor dotted with large ships, was a pretty inspiring sight). Here’s the sleepy man once we got home:

He did manage to wake up so we could change his diaper and put him in his pjs:

(apologies for the lousy picture quality of these pics; taken with a BlackBerry, which isn’t known for sharp photos)

Then it was sound asleep for the rest of the night. Well, until 3am, when he woke up and would not go back to sleep. (In his defense, that was 8am to his body clock.) He crawled around, he babbled, he crawled some more, he pooped… Mommy and I basically traded shifts for the rest of the night, one of us keeping him company while the other napped, but we were both pretty much zombies by morning. Naps (two hours for Mommy, one for me) helped. And the little man? Full of beans, as we see from this video from Monday morning:

This evening he went down around 8pm. We’re expecting him to wake up a little later tomorrow – 4am, probably – as his body clock slowly resets.

Update: Nope. 2am. Going in the wrong direction! Then back to sleep, then up at 3am. Then back down after a while, then up at 6am.

From the Video Archives: Nyan and Family Elders

A trio of videos of the Little Man with various family elders. First up, playing with Grandma L. (and a cameo from Grandpa L.!) from October 7, 2011:

Today’s Photos: Playing in the Yard

Our boy loves the sunshine, and loves the plastic snake toy that Auntie Emerald got him.