No costumes, trick or treating or caramel apples for young Nyan Thomas, not this year. A wee bit young for that. But not so young that we can’t dress him up in a Grandma-gifted pumpkin outfit! 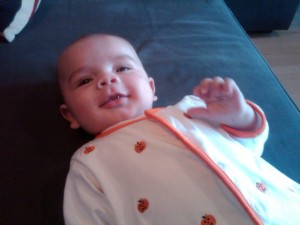 (If you look closely, you can see that our boy decided to dress up this year as a baby with lots of drool coming out of his mouth. Scary!)

Check back soon (maybe later today, maybe tomorrow?) for stories and photos from Nyan’s first road trip on Sunday! Meantime, a couple of recent videos of the little guy.

Nyan and his proud parents. 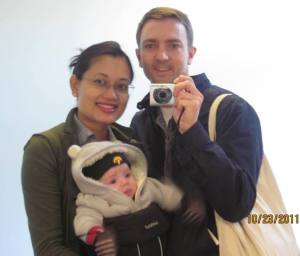 Apologies for the dearth of postings of late, folks. Beatrice and I swapped colds/mild flus for a while there, work’s been kicking my arse of late… excuses, excuses. Without further ado, a few random updates:

Coughing and other medical matters

Beatrice has had a cough for a little while now. It’s unfortunately normal for her that after she’s sick, she hangs on to a cough for a few weeks. The other morning, she was changing Nyan at 4 in the morning when she called out to sleeping me, in a voice sharp and worried enough to rouse me from sleep instantly (no small feat, that) and make me bolt upright in bed. “Nyan is coughing!” The fear being, of course, that she had somehow infected him with something or other. I checked him out; he looked fine, and I heard no coughing. So back to bed. Over the next day or so, she heard him cough a couple more times. I never did, and he has seemed 100% healthy, touch wood. So here’s my theory: babies are, of course, sponges, soaking up whatever they see around them. Nyan, I figure, was just mimicking his mommy, giving a little (harmless) cough every now and then. It makes a lot of sense to me, especially since he shows no sign of being ill, and his coughing is very infrequent.

Nyan did have his first unscheduled trip to the doc a couple weeks back when we woke up one morning and found a small boil on his rear end. The doctor was able to squeeze us (okay, Beatrice and Nyan; I had to work) in for an early appointment, and said it was nothing to worry about, though she did prescribe an antibiotic cream just to be sure. It went away within a couple of days, though it came back a few days ago; Nyan saw the doc for a regularly scheduled appointment this morning, and she says there’s no cause for alarm.

Also this morning: second round of vaccinations. Including one for meningitis. It’s crucial to do, of course, but the little guy does not care for the shots. Oh, he’s brave: he’s calm and quiet, cries out briefly when he’s pricked by the needle, but otherwise a perfect gentleman. This afternoon and evening, though, he was clearly feeling it. A little fussy, a little sore, a little unhappy. We gave him lots of cuddles and love, and after a four-hour nap he woke up and played with Daddy for a while in the evening, before crashing out for (we hope) the night. We expect the next couple of days to be rough as the vaccinations work their way through his little body.

Beyond that, touch wood, the boy seems healthy, happy, alert, and bright as ever. He’s now three months old, and 12 and a half pounds, roughly (we have the exact weight, I just don’t have it handy) – getting near to double his birth weight of seven pounds exactly. He’s already outgrown some of his newborn clothes too. I don’t know where he is in terms of percentiles and whatnot, but seems healthy and coming along quite nicely. 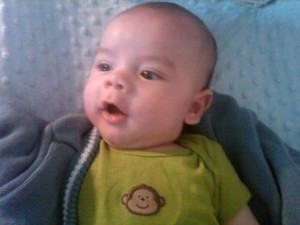 I hinted at this in an earlier posting, but we had a nice (though brief) visit from Grandma and Grandpa L. a few weeks back. They had driven from Iowa to Virginia for a vacation, and decided to swing by New York on their way home. Only seven hours out of their way… They arrived on Friday afternoon and left late Sunday afternoon. So, too short, but wonderful to see them. Hard to say who enjoyed it more: the doting grandparents or the doted-upon young man. Mom and Dad enjoyed it as well, not just for the company, but also because they graciously agreed to watch Nyan on Saturday night while we went out to dinner together – our first date-esque evening since, well, two days before Nyan was born. Grandma L. is coming back in a few weeks, staying with us for five days or so during the week before Thanksgiving.

Speaking of travel: we’ve booked our holiday travel. Beatrice and Nyan are heading to London and Colchester in early December; I’ll follow a few weeks later, arriving on the red-eye on Christmas morning. I’ll be without them for three weeks, which I know will be very tough. Not looking forward to it one bit, frankly, if I can be selfish. But it’ll make Beatrice very happy to have her parents and brothers and sister and everyone around to help care for Nyan (and to have her mom feed her endless portions of homemade Burmese food!). And Nyan can meet the family members he hasn’t met yet, plus all of Beatrice’s friends. And we’ll have a nice week and a half in the UK once I arrive – mostly in Colchester, including Sharon and Chris’s wedding at New Years, but also some time in London.

On his daily jaunts around the neighborhood, Nyan doesn’t ride in the stroller that much nowadays, but rather is strapped to Mommy in the Baby Bjorn. He wasn’t enjoying facing her chest, so we’ve turned him around so he can see the world, and he seems to be loving the view. Or maybe he just loves the attention: without fail, Beatrice is stopped by any number of random strangers, oohing and aahing over how cute the boy is. The proud parents eat it all up, of course, and Nyan doesn’t seem to mind either.

Beyond all that, all is well. Nyan is sleeping through the nights fairly well; he’ll usually have a feed around midnight, then around 4ish, then again around 7 or 7:30, when I’m already up. That’s not bad, though we’re going to try to get him to eat a bit more at midnight in hopes of getting him to sleep the whole night through. He’s typically going to sleep around 8 or 9 these days; some days he fights it for a bit, other days he pretty much passes out soon after bathtime. We’ve added a new twist to bathtime too: every now and then, we’ll fill up the tub as if it’s for an adult… and then either mommy or daddy gets in, followed by Nyan. We make sure he’s perfectly safe, of course, but he LOVES it. He splashes, he waves his arms and legs as if he’s swimming, he smiles, just loves every second of it. Is this a sign that he’ll be a strong swimmer? We hope so. Daddy’s looking forward to teaching him to scuba dive.

Otherwise, we’re just enjoying hanging out with him, talking to him, whether in Burmese, English, or baby talk… and yes, the kid is a talker. Especially during the days, he’s babbling nonstop. We figure he thinks he’s actually communicating with us, and wonder what he thinks we’re saying when we make random gurgling noises at him. Other times, we think he seems a little frustrated when he’s babbling and gurgling and yet remains unable to clearly communicate. We recognize most of his cries and what they mean, and have gotten quite good at figuring out when he’s hungry, when he wants a cuddle, when he wants to be left alone, and when he needs a new diaper. Beatrice is especially good at interpreting those signals; I’m not nearly as far along, since I get to spend huge chunks of my days and weeks away from him, chained to an office in Midtown Manhattan. But I’ve got lots of picture of Nyan around my office now (yeah, I’m *that* guy at the office. Got a problem with that?), so even at my lowest, most stressful moments of the day, I can quickly remind myself why I’m working (hey, diapers and baby scuba lessons aren’t cheap!) and, especially, what’s waiting for me when I get home.

All for now. Will try to update this more frequently than I have been. Come back soon!

Nyan Thomas spends a few minutes nestled in daddy’s arms this morning, before daddy has to trek off to work, and Nyan Thomas gets to climb back in bed with mommy for a morning nap. 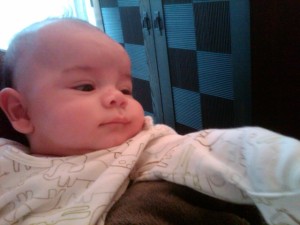 Our boy is 12 weeks old today. A trio of recent photos: 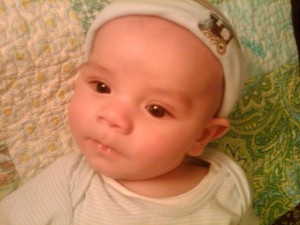 A quick little video of Nyan Thomas, hanging out and making random noises.

Over the weekend, your humble blogger caught the bug that Beatrice suffered though last week. He took a couple days off from work. Beatrice took excellent care of me, of course, but I found the best medicine to be a cuddly little guy: 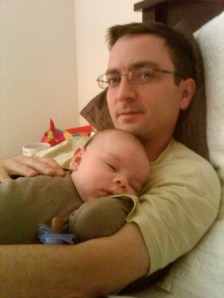 Nb: yes, all necessary and appropriate precautions were taken to insure that Nyan Thomas didn’t catch the bug. All good. Especially since we’re pretty certain he was Patient Zero in this outbreak.

Grandma and Grandpa L. came for a quick visit this weekend. More on that later. But first: the happy camper, taking a break this morning from being spoiled…

Okay, perhaps not *ever*. I’ll admit that I may be a bit biased on that assessment. Not because this reporter is a supporting actor in this drama, but just because, well, have you *seen* our kid and how adorable he is?