Every year, there’s a week-long event in downtown Singapore called Night Fest. It’s a whole bunch of cultural events, food and music, art displays, and other cool things. We’d never made it down before, but we did this year.

There were several things we wanted to be sure to see, including a visit to the Gem Museum. (Who knew there was a Gem Museum in Singapore? Not us.) It was a small but nice little place run by the local association of gem-sellers. One of the officials took to Nyan, who was very excited to see all the gemstones, especially the ones from Myanmar.

The main event, for us, was this display called Lords of Lightning. It’s two guys up on tall pillars that double as Tesla coils, zapping huge amounts of voltage at each other. It was pretty intense and really cool 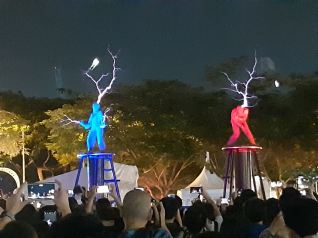 Then there was a random marching band, which led to our boy doing his dance thing:

Elsewhere, they were projecting a cool light show onto the facade of one of the art museums.

All in all, a really cool and fun night!

Posted by Chris L. on September 21, 2018 in Uncategorized