Nyan complains about his taekwondo class from time to time, and says he wants to quit it. We always tell him “Nope.” It’s a good skill to have, it keeps him active, and it has demonstrable goals and rewards when he reaches those goals — very good things to learn about life.

The reward is typically a new belt. To get that belt, he has to attend class, learn new moves, practice, and go to the “grading exercise” where he shows a committee of masters that he has, indeed, learned the right moves and should advance to the next level.

Here he is in early August, practicing outside of the grading exercise room, just before going in:

Did he make it to the next level? He sure did!  And at his next weekly class, his teacher, Mr Lee, gave him his next belt: green tip. 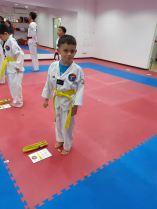 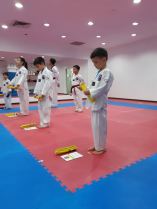 He’d never admit it, but he was pretty proud of himself, and rightfully so. Mommy and Daddy were too!

After the new belt ceremony, the kids relaxed by playing a rousing game of ball-throwing.

Next up for Nyan is a grading exercise in early November, if he is ready to be graded then. If he passes that, sometime in November he should receive his green belt!

Posted by Chris L. on September 26, 2018 in Uncategorized