Last in a 12-part series looking back at the first 12 months of Nyan Thomas’s life, in advance of his July 26 birthday.

What a wild and wonderful year it’s been. And Nyan Thomas’s 12th month of life – which stretched from late June through, well, today – was no different. It was the start of our new life in the UK, and it was pretty unsettled, as Mommy and Daddy hunted for jobs and a new home (with success on all fronts, we might add).

We arrived in the UK just before the start of his 12th month, and since then we’ve been staying with Uncle Noel and Aunt Lisa, not far from the other K. siblings (literally – three of them live within a five minute walk from here. And that’s if you walk very slowly!), and just a short drive from Pho Pho and Phwa Phwa’s house. So we’ve had a ton of support in taking care of the little guy as we look for homes and jobs.

The weather for much of July was, as they say here, rubbish: chilly, cloudy, rainy. But the past few days have been much nicer – perfectly clear skies, temps in the mid-80s – so we’ve gone on numerous strolls around the neighborhood or just crawled around in the grass in the back yard. 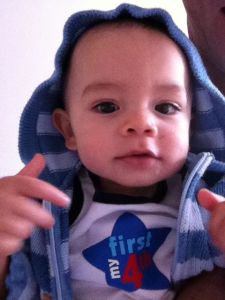 Nyan has been back to Colchester Zoo with Auntie ZuZu and Uncle Ian, and to various other parks and other places. We also discovered that the boy loves to dance – click here for some great videos – and also celebrated the Fourth of July, with red white and blue clothing (plus a UK diaper, just for good measure), as you saw here.

But, really, it hasn’t been that eventful of a month for our boy; Mommy and Daddy have been in a holding pattern of sorts, as we wait for our new home to be ready for us to move into (that’ll happen this coming Saturday). Nyan doesn’t seem to care, though; he’s happy as long as he’s getting plenty of love and attention – he certainly lacks neither – and as long as his diapers get changed and someone gives him some food whenever he demands it.

His aunties and uncles have been great about spending time with him; they say it’s to “give Mommy and Daddy a break,” but we have this suspicion that it’s more about just wanting to spend some time with Nyan, who – this may sound immodest, but hey, it’s our blog! – really is a sweet-natured little guy. He rarely fusses or cries, except for when he’s hungry or tired.

Oh, he gets up to all sorts of shenanigans, don’t get me wrong – if he’s reaching for some random household item that he shouldn’t be, and he gets told “No” (whether that’s in English or Burmese), he’ll stop, look at whoever is telling him No, and usually either go ahead and grab for it anyway, or give some babbling backtalk. (And often he’ll go ahead and grab it then, too!) Sometimes, though, he does listen and stops what he’s doing. Not that often, though. He remains as stubborn and strong-willed as he’s been since the day he was born. 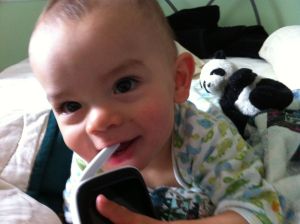 But it’s all good. He’s healthy and happy (touch wood on both points), and it’s pretty clear that he feels loved and secure and content. He gets bored sometimes; he’s extremely inquisitive and curious about everything, and sometimes we just don’t have the time to indulge him. But that’s rare, actually, as we want to encourage those traits. It just means that we’re exhausted much of the time, and get few chores, errands or correspondence done. (Except when a family member watches him for a little while, of course.) 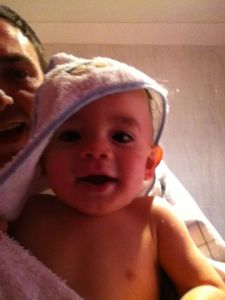 No complaints though, not at all. He’s a wonderful little guy, and we feel so blessed to have him in our life. Here’s to a great first 12 months, and here’s to much more fun, exploration, and general good times over the next year and beyond!