RSS
← To the Zoo with Uncle Oo
Nyan Thomas, Goalie →

In late October, Tita — Jayden’s helper, who spends a fair amount of time with Nyan on playdates and walks home from school — had a birthday party down at East Coast Park, not far from our place. We headed over, along with Jayden, Jonnie and Lily.

Kids being kids, they spent a lot of time getting bucket of water to dump on the sand. 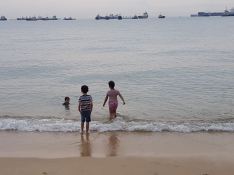 The main reason for the buckets: on the beach was the remains of a huge bonfire from earlier in the day. It was still smoldering a bit in places, so the kids were trying to put it out. Nyan someone came up with the name Ash Destroyers, which I think he meant to be related to what they were doing. Sounds pretty cool, even though it doesn’t quite make sense.

The kids also decided they would dig tunnels in the sand. Jayden wanted to dig all the way to Indonesia; Nyan was feeling a bit more ambitious and thought he’d dig all the way to Iowa, and then pop up in Grandma and Grandpa’s kitchen to surprise them. Didn’t quite make it, though.

Bonus: A week before this fun beach party, Daddy and Nyan had taken a stroll down to the beach to play for a bit. 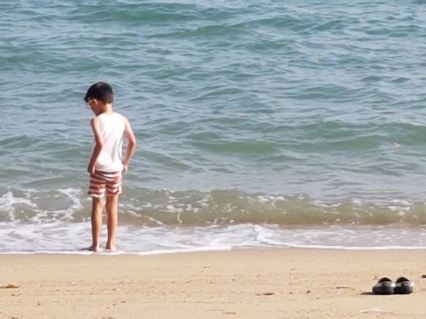 ← To the Zoo with Uncle Oo
Nyan Thomas, Goalie →