Daddy loves to scuba dive. Nyan is too young to dive — you have to be at least 10 years old — and in fact has yet to even snorkel (though we plan to change that this summer!). Still, he was pretty excited to accompany Daddy to a scuba diving exhibition at our local convention center.

The place was chock full of stalls selling all kinds of dive equipment, booths staffed by various dive resorts or destinations, and environmental groups touting the need to, say, reduce the use of plastic and to stop ordering shark fin soup — all good and valid concerns. There were also attractions specially set up for the kiddos.

Like one where the kids are strapped into a harness, lifted up by a sort of crane, and then lowered down into a faux water tank, where the kid — still suspended — does things like clean up ocean trash or count the number of fish. Here’s our boy getting strapped in:

He looks a little dubious. But once he got going… well, let’s roll tape:

Yeah, he loved it. Loved it so much, in fact, that he went back a second time.

There was also a tank of mermaids. 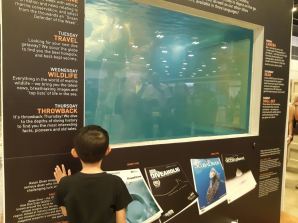 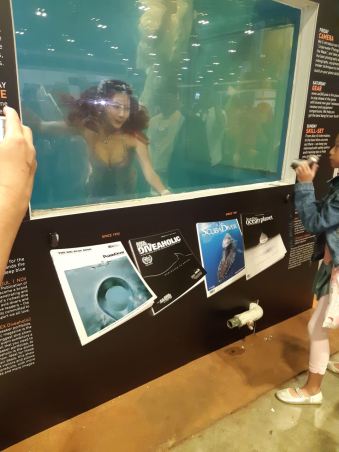 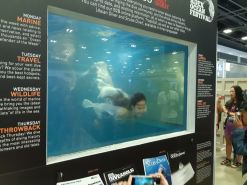 Probably Nyan’s favorite activity was the faux fishing boat. It was set up by a company called Dynaglass, which makes fiberglass stuff — like boat hulls. Nyan was able to climb onto a modest-sized boat, grab a fishing rod baited with a magnet, and catch a paper ‘fish.’ 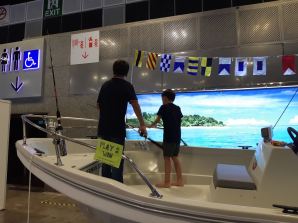 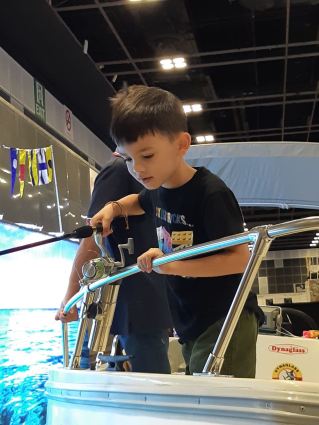 Here’s the fisherman in action:

As with the fake diving, he enjoyed the fake fishing so much that we returned a bit later for another round.

He not only got some fake fish; he also got some sweet Dynaglass branded products, including a nice thermos that he now uses as his daily water bottle, and a Dynaglass baseball cap that he’ll often wear to school.

Here are a few random shots from the show — including one of that hat. 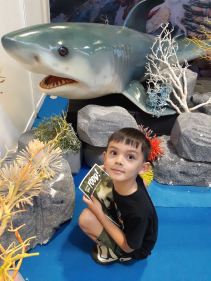 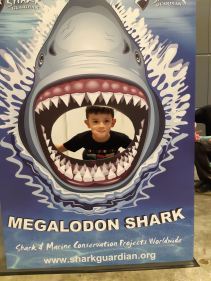 Nyan says he wants to go diving with Daddy someday. Til he can do that, we’ll just have to come back to this dive show each year!

← Soccer Star
Nyan and His Friends →