Jonnie is the younger brother of Nyan’s bestie, Jayden. He turned 4 in February, and his family threw him a party at a place called Amazonia, a sort of indoor playground place where we’ve actually been before, for Kyle’s 4th birthday a few years ago. It was the one with the giant dinosaur, here.

It’s quite a place, Amazonia, with climbing structures, a huge slide, function rooms, and a room dedicated to these cannons that fire soft missiles at targets on the wall. 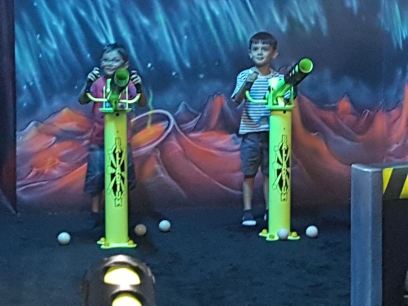 There was also a large room with a putt-putt golf course. And it had black-light special effects! 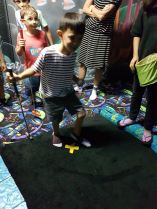 Was there cake? Of course there was cake.

And lots of balloons, which lots of kids had lots of fun with.

Beyond all that, we also saw plenty of simple, random silliness. 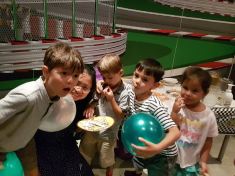 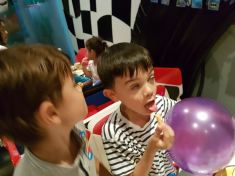 And finally, the slide. The same slide that, three years ago, Nyan refused to go down at first. (It *is* pretty big, it’s true.) But once he finally went down it, he wanted to go down it again and again. And it’s still enjoyable today.