RSS
← Taekwondo: The Next Level
Winding Down at MMI →

Eva is a girl a year below Nyan at his Montessori school. She was turning five in July, and invited a bunch of schoolmates – including Nyan and several others from his class – to a party, held at an indoor playground called Waka Waka. Same place, in fact, where Kyle had his party back in February, and where Nyan conquered the rope course (see here).

The rope course wasn’t available this time, but Nyan still managed a personal first, and had a great time as well.

There were games and songs and cake: 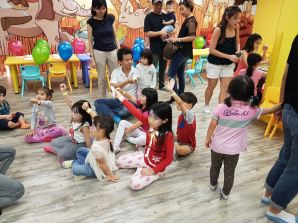 And they did the limbo:

Also a pinata. Nyan got a few whacks at it. Nice hits!

After the organized party bits, the kids went buck wild at the playground portion.

One popular spot was a little house where the kids could put up foam bricks to build walls. 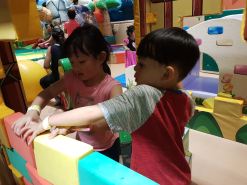 It’s all well and good until a younger kid tears down the wall:

The highlight, though, was surely the gigantic vinyl volcano. It’s got some rope and footholds for kids to climb up, but it’s tough as it’s steep and the vinyl is slippery. Nyan tried but didn’t make it when Kyle had his party here five months earlier. But this time, Nyan was a fearless mountain climber:

So proud of our boy! He remains a bit skittish and shy when it comes to trying new things – especially if they are a little challenging, like this – but he does get there eventually. Just gotta be patient with him at times.

Besides all this fun, Nyan also got to hang with his pals – especially Adriana, Kyra and Chrysa. We’ll close with some lovely pictures of all the kiddos. 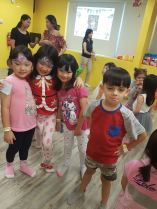 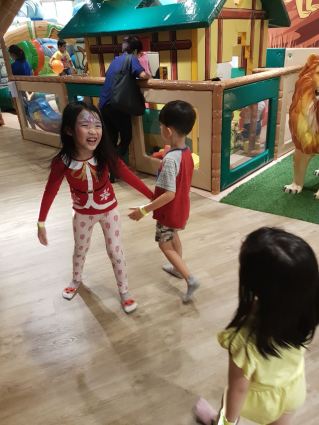 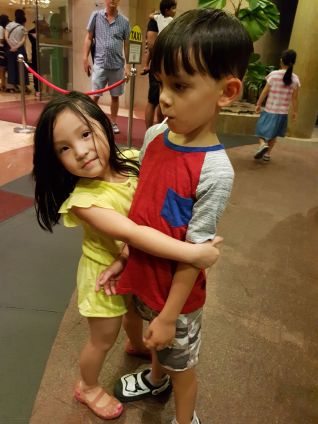 ← Taekwondo: The Next Level
Winding Down at MMI →