Yes, it’s true: as of Saturday, we’re the proud parents of an ever-more-independent 18 month old. Where does the time go, etc. 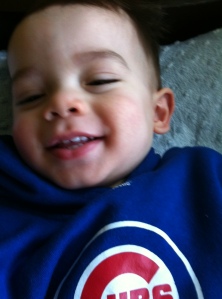 He’s certainly come a long way. His vocabulary is getting quite good, as he’s picking up new words on a daily basis. Some of them it’s clear what he’s saying, sometimes it’s clear that he’s trying but he’s still struggling with a clear pronunciation. But still, definite progress. (This evening, he handed me something and I almost think he said ‘Here you go.’ But that may have been my imagination – I suspect he’s not quite at the stage where he’s saying full sentences.)

He’s walking around like a madman; haven’t seen him crawl in weeks. When he falls down, he gets right back up. (We’re steeling ourselves for the time – we know it’s coming – that he falls and smacks his head into a wall or a corner or something similarly painful. It’s not going to be pretty, but we know it’s coming. Meantime, of course, we try to keep that from happening.) 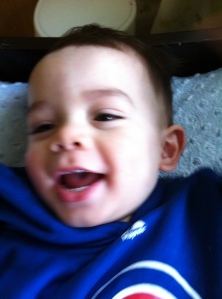 He’s also Mr Independent at feeding time now. This evening, he had his bowl of food and Daddy made the mistake of putting some food on a spoon and trying to put it in his mouth. Oh, no… dude started bawling. Why? Because he wanted to do it himself! So I handed him the spoon and he slowly fed himself, with no tears. Sheesh.

We tried to upload a couple of videos (one with him helping with the laundry, until he got bored and toddled off to empty out a kitchen drawer), but we’re having Youtube issues tonight. So we leave you with the young man showing off his serious side. While perched on a shoe rack, as you do. 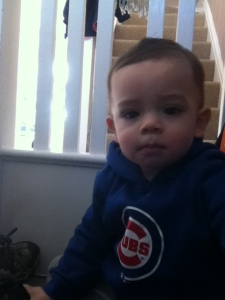