RSS
← A Night at the Circus
Baking with Grandma and Grandpa →

Our boy keeps insisting he doesn’t want to do taekwondo any more. But it’s a half-hearted plea, and we think motivated much more by feeling a little too lazy to go to class, than by any real objection. And sure enough, once he gets to class, he always has a blast.

In early November, he qualified for the next round of grading, which if he passed would get him a green belt. 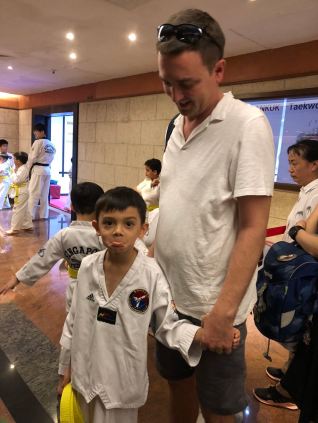 And — as you already know from the title of this post — he passed! So a couple weeks later, we got the new-belt ceremony in class. 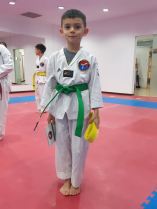 Now that he’s a green belt, he gets to do sparring, which is a separate one-hour class held just before his regular one-hour taekwondo class. Sparring involves kicking and hitting a fellow student — properly padded, of course — and other fun activities.

← A Night at the Circus
Baking with Grandma and Grandpa →