Nyan got his first bath on Monday evening. Much needed.

We’d been cleaning him, of course, through sponge baths and the like. But on Monday evening, when I went in to the bedroom to wake him from his nap and give him his evening feed, his onesie was soaked in the back. I quickly realized that someone (ahem) had, uh, apparently screwed up the diaper and had left a little gap along the side of his hip. His jojo (as they call it in Burma) was placed just so, so that when he peed, rather than the diaper absorbing it, it somehow shot out the back of the diaper and up the back of his clothes. (No, it doesn’t make a lot of sense, and it clearly took a lot of either skill or luck. But be that as it may, half his back was soaked in his own pee. Not good.)

So we decided it was bathtime. We had this funky weird plastic/rubber contraption that, we quickly learned, doesn’t fit in any of our three sinks. So we ran a lukewarm bath, and daddy climbed in, sitting with his knees up. Beatrice handed Nyan to me and I gently rested him on my thighs, slowly lowering him into the water. He got a concerned look on his face, but he tends to recognize that whatever his parents are doing to him, it’s all for good, so he wasn’t too freaked out. He clearly enjoyed the warm water too, ‘cause a few seconds later… a geyser of pee streamed up and hit daddy’s chest.

Once we managed to stop laughing, we started to drain the tub while filling it back up at the same time – who wants to bathe in their own pee, let alone for their first-ever bath? and who wants to bathe in their son’s pee? Not this guy – and gently washed his body and his hair. He was pretty okay with the whole experience and wasn’t freaked out by being in the water. Which is good, ‘cause his dad’s already making plans to teach him to scuba dive. 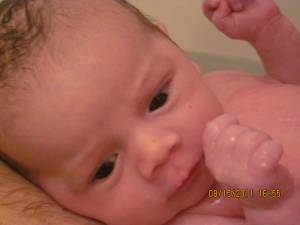 I handed him back to Beatrice who swaddled him in a cozy yellow towel that Grandma had given him (it actually used to be the baby bath towel of his cousin Mia) while daddy took a quick shower. Nyan was none the worse for wear. 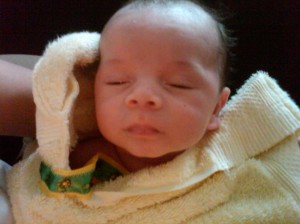 Nyan right after his first bath

Speaking of peeing. On Tuesday morning, while Beatrice slept, I needed to give him a diaper change, for both poop and pee. (That’s kind of turned into a mid-morning ritual.) Now, there’s absolutely nothing pleasant about poop – especially baby poop, which has its own unique consistency, almost fluid. But, you know, when it’s your own baby… I’m not gonna say it’s pleasant, but it’s really not bad at all. So there I was, merrily wiping him clean, holding his legs up to get his backside clean… when Nyan decided that he was not, in fact, done pooping.

And, wow. The power and velocity! Okay, it didn’t go that far – but it did shoot out at least a couple feet – off the changing table and onto the floor, as well as all over daddy’s hand. Yum! I had to laugh a little bit. I had to laugh even more when, a few minutes later – as I juggled various baby wipes and Kleenex to clean up as much of the Gray Poupon-looking crap I could – the little dude decided he wasn’t done peeing, either! A quick little squirt, all over his cloths, before I managed to grab a clean diaper and hold it over his jojo.

I think the entire diaper change ended up taking about 45 minutes – about 40 minutes longer than it should have. Like I said in an earlier post, it’s tough to get much of anything done when you’re on baby duty.

Beatrice laughed when she got up and heard the story. And, sure, I laughed too. And we both laughed even more later that day when Beatrice was changing another poopy diaper. “Be careful,” I warned her. “He’s probably not done yet.” I was half-wrong: he was done pooping. But not peeing. Once again, all over his clothes, his body, and the changing table. Back to the bath for young Nyan!

One response to “Nyan’s first bath”